Today, being the first of April is observed as ‘April Fool’s Day’ in the United States and elsewhere. After only a few keystrokes I’ve learned that the holiday was first mentioned by Chaucer in 1392. That’s a long history of pranks! 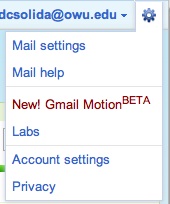 In the Internet Age we continue this tradition utilizing the social media of our time. For example, Google has ‘launched’ Gmail Motion, even inserting a link to it in the Gmail (and BishopMail) gear menu. YouTube features the ‘Top 5 Viral Pictures of 1911’ and lets you watch any video in 1911 style. I watched the beginning of a video on the current social media revolution–that I had shared in a workshop yesterday–in this redux rendition. Talk about anachronistic cognitive dissonance! I’m sure other sites are having similar fun today.

And we love to share such fun via social media. The top 5 viral pictures of 1911 video has already been viewed nearly 400,000 times and it’s not even 4:00 EST. That’s the power of social networks: connecting people, spreading the word or the meme. One consultant described it as word of mouth on steroids.

When I had a personal blog several years ago, I would change the theme and title and publish bogus posts on this day. Those posts were some of my most popular. This EdTech at OWU blog is relatively new and not well known, but I look forward to it becoming more conversational and less monological. In that spirit, the spirit of social media, I invite your comments. What are your favorite April Fools pranks of the Internet Age? What are your favorite stories of the human impact of Web 2.0? (Stories of Twitter Revolutions in Northern Africa most welcome!)

This site uses Akismet to reduce spam. Learn how your comment data is processed.